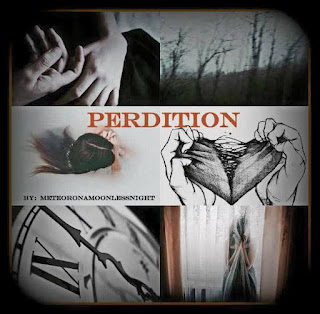 
"What was it like to love him? Asked Gratitude.

It was like being exhumed, I answered, and brought to life in a flash of brilliance.

What was it like to be loved in return? Asked Joy.

It was like being seen after a perpetual darkness, I replied. To be heard after a lifetime of silence.

What was it like to lose him? Asked Sorrow.

There was a long pause before I responded:

It was like hearing every goodbye ever said to me—said all at once."

Grey is the predominant color of the day, from the somber clouds obscuring the sky, to the color of the dress I'm wearing as I try to hide my small frame behind a tree at the top of the hill. The mood is grey too, mine and those that don't belong at my mother's graveside service. The grouping is a decent size, most with umbrellas open over their heads, giving the impression of flowers waving in the wind as the mourners move over the dull brown grass. Given the distance between us, I can't hear what's being said, but I imagine it as the same drivel that's always spoken for the living about the dead. Your life is not ever your own, not truly. It's the living that suffer when you die, when you're finally free of the binds you can't break in life. As long as your heart beats in your chest you have obligations to others, never having the chance to be your own self. It was a harsh lesson I'd been forced to learn at the tender age of seventeen, before I was mature enough to have that knowledge forced upon me. Renée had done what she could to protect me, going so far as to leave my father and flee with me, but in the end it turned out it was all for nothing.

Not one person that I can see down there loved her, or cared for her, not in so many years. I was the only person she could count on, but that hadn't been enough. If I had known that declining an offer of marriage would result in her death, I would have accepted, regardless of who was offering. I would have done anything for her, including giving up my very freedom. If only I'd known the truth in time to save my mother's life.

I spot the only other person I would lay down my life for, one of the people whose lives I'd ruined years ago. I thought nobody could see me this far away, but now it appears that I was wrong. Even at such a distance, Edward seems to meet my eyes directly, the jolt I feel from the recognition on his face spurring me into action. I hurry away, practically running for the rental car that I left idling on purpose, and I jump inside while my heart beats frantically in my throat. I watch in my rear view mirror as Charlie catches up to Edward and they stop halfway up the hill, watching my taillights as I tear out of the cemetery. What have I done?

This was a mistake. I knew it would be, but I couldn't help myself; I needed to pay my respects to my mother for all the time she spent trying to protect me. It seems as though all of my efforts were futile. I drive through the rainy day with tears on my face, fighting off the painful memories that all started in this godforsaken town. Just two days after I refused the offer that came via my father, I'd found my mother at her home; she was face down in the backyard, in the garden she had so loved. I'd lived on my own for only a few years, choosing to stay nearby my mother and visiting often. We had plans to have lunch and go shopping, something we did on a monthly basis. Instead, I spent the day talking to the police of Florence, Oregon, trying to dissuade them from looking for who'd shot her. Her funeral arrangements had not changed even after we left Forks, and still requested her burial at the family cemetery. I made the arrangements by phone and email without any intentions of attending. Coming was a dangerous gamble, and I know in my gut I've just lost.

I drive to the hotel room I booked in Port Angeles, since my flight home isn't until the morning and there is no way I can stay in Forks. I've spent too much money on the funeral, too much on the plane fare and hotel, but none of that matters anymore. Renée's fortune is now mine, for all the good it's worth. I have an appointment back home with an attorney first thing Monday morning to put as much of it into a trust as possible; I know exactly who wants to get their hands on that money, and I have to try to stop them.

I am so emotionally drained that all I can do is lock the chain and lay down fully dressed on top of the ugly, orange polyester comforter. I don't even realize I've fallen asleep until a noise wakes me. It seems to be a slight sound, whispery, like a dead leaf disconnecting from it's branch and brushing through its fellow leaves on its way down. I sit up, rubbing my tired eyes, feeling muddled. I try to pinpoint what could be out of place in the room, but I struggle to find anything. The hairs on the back of my neck prickle as I shakily stand and make my way cautiously to the door.

There, on the floor just in front of the door, is a folded piece of paper. Lying on the carpet, my face pressed to the thinning pile, I stare at the strip of light that shines through between the floor and the bottom edge of the door. I place my palm against the solidity of the cold metal, trying to reassure myself that I'm safe. But that is just a lie to comfort myself; I was never safe unless he'd wanted me to be. He holds all the strings and he still works me like a puppet master.

Slowly sitting, I snatch the paper up, then just as quickly drop it as though it burns me. My breathing escalates, coming out in short, quick bursts. I knew the truth already, but to see it in black and white is a confirmation I never wanted. I have no more options; my time is up. Trying not to hyperventilate, I scoot to the desk in the corner and grab a pen. There are black spots dancing in front of my eyes as I write my response with a shaky hand. I fold the note back in half and make my way to the door once more, struggling to swallow past the arid desert in my throat.

This time I collapse in on myself as I arrive back at that thin line between my safety and the outside world. The paper goes back under the door with that same soft whoosh that woke me up earlier, and I stay prone as I wait. My fingers are curled into my palms as I test my theory, my breathing still not normalized. I'm scared to blink, to shift, to make a sound. I'm terrified that I'll meet the eyes of the one I have always been most afraid of, or even one that works for him. I don't know what I'll do if they mirror my pose instead of simply grabbing the note and moving on. But I know in my gut someone is watching; that's how he operates.

I blink rapidly, my stare so severe my corneas have dried out and my eyes burn. I can just make out the diamond pattern on the carpet in the hallway as I watch. It's probably only moments, but feels like years before a gloved hand grabs the paper from the floor, dusty brown boots pausing in front of my room. I cringe away as though there is nothing solid between us, scrambling backwards until I bump into the bed.

"Wednesday, Isabella!" is all I hear before the hallway is silent again.

So then, Wednesday is to be the last day of my life. I close my eyes tightly and wish it to be an exaggeration. 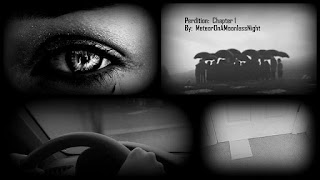 Email ThisBlogThis!Share to TwitterShare to FacebookShare to Pinterest
Labels: Perdition